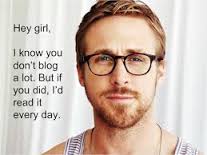 Talk true to me. If you knew Baby Goose was just waiting for your stuff, wouldn’t you be piping it out like a rapid-fire machine gun?

It’s hard to be a writer and not be infected by the Writer’s Ego. After all, writing is a form of communication and if nobody’s reading, how are you communicating? Most writers I know write to be read, not just to pile up long strings of paragraphs in their bottom desk drawers to be discovered when they kick it.

When I think about the reasons I kept writing after college when I no longer had to, I come to this conclusion. All along the way people (teachers, professors, peers) stroked my ego by telling me I’m a good writer. I didn’t know that, but I recognized the pattern of that feedback.  I had friends along the way who I thought wrote well, but when the professor would say, “This is just crap,” they never wanted to write again. They were embarrassed. Ego and the dark side of Humility, crawling into the fetal position, and pulling the blankie over their collective head.

And yet so many writers claim to not write for anyone but themselves. Unfortunately, it’s not themselves that works as agent, editor, publishing house, reader, library, bookstore, readers. In the end, we write to be read and we want others to love it…all others–the gatekeepers, the readers, the librarians, the award committees. There’s always somebody to please.

Yet the message you hear over and over again is, “This business is so subjective.” What one person loves, the next reader can outline a list of bullet points about what’s wrong with it. You just can’t please them all, and you want to posture as if you don’t care, but there’s a place inside that wants to please the reader. As I was growing up. I never had anybody tell me anything except, “You’re a great writer.” I’m pretty sure if I had, I would have stopped. I may even resist posting Facebook statuses.

When Transcendentalist Ralph Waldo Emerson came to speak with American writers, he told them to find their own voice, that part that is uniquely them. We hear that over and over today from agents and editors at conferences who speak to both new and veteran writers about the elusive “how to get published” conundrum. But to be uniquely you requires not only a knowledge about who you are and how that differs from the rest of the Earth people, but also how that connects with the rest of the world. What I see much more regularly is people getting caught up in meeting the criteria of publishing, which often has little to do with being uniquely who they are.

What’s the Ego’s block then? When too much chatter lords over the creative process, it deadens it. It’s harder to access. When too many rules dictate the flow, the writing feels stale. On the other hand, at least for me, when I sit down to pour out on the fertile landscape of my journals, I see ideas blossom in a way that’s very hard to copy when I work on manuscripts. My current goal is to dismiss my Ego at the bottom ot the stairs, before I go to my office, and write like nobody’s watching.

Sorry, Baby Goose. Right now, it’s not about you.