Today, I’m proud to interview Sharon Weil, author of the newly released Donny & Ursula Save the World. Not only is Sharon an award-winning screenwriter, producer and director, she’s also my cousin. Everything she does, she does with passion and excellence. Her debut novel is no exception.

Donny and Ursula Save the World is a wake up call to the potential dangers of genetically modified seeds, couched in a funny, wild-romp, romantic-mishap adventure, about this odd couple, Donny and Ursula, who become unlikely heroes and join forces with even less likely characters (belly dancing feminists, outlaw guerilla gardeners, gun-crazy survivalists…) to save the world from a plot by an agribusiness giant to control the world food supply by owning all the seeds.

At its heart, the book is about what it takes to find the courage to take action, and its playful premise is that sex and Eros are the prime motivators for ALL human behavior. Ursula is a woman who has never had an orgasm, and once she does, it leads her to a political awakening that compels her actions on behalf of Mother Earth. It’s a wacky, yet poignantly serious story.

You are an award-winning screenwriter, producer and director. This is your first novel. What made you decide to write a book?

Before Donny and Ursula Save the World, everything I’d ever written—besides a grocery list—was always intended as a screenplay for a movie, or as a theatrical piece. It’s the way I think and what I’ve known. But when these characters and their crazy stories started to drop in, I knew they needed a larger and more flexible form in which to play. I’d never wanted to write a novel—too many words that can’t change—but, in my view, these stories choose you, and their form, and they’ll make your life miserable if you don’t become their servant. It’s not the first time I’ve jumped into something, blind. As it turns out, I found it an incredibly satisfying and magical experience, and plan to write more novels once this one finally leaves me alone.

How is writing a book different than writing a screenplay?

Screenwriting is all about economy and craft. Usually plot driven, the words you use are meant to describe visual moments that are shown, rather than told. Directors and producers annoyingly refer to the script as the “blueprint” for the movie, for it’s meant to be the basis of the collaborative process that is yet to come.  And… you don’t even have to write in full sentences!

Writing a novel, at least this one, was all about the particular words on the page.  The visuals, the character descriptions, the rhythm of speech, all have to be there on the page. There are no actors, or scenery, or even music to interpret the work.  And a book is meant to come from one voice… the author’s.  Otherwise, story is story—there are many ways to tell them. I live in Los Angeles where people roll their eyes in boredom when you tell them you just finished a script—but if you say you wrote a book, they bow in respect!  Go figure.

Can you give us your elevator pitch for Donny and Ursula?

The most importantly funny book about sex, love and GMO seeds you’ll ever read.

Where did the idea for Donny and Ursula Save the World come from?

Ultimately, Donny and Ursula Save the World is a love story, and therefore a romantic comedy—because most love stories are. I write from the experience of too many failed relationships, several successful ones, an enormous fantasy life, and a fascination with the connection and foibles of the sexes.

The whole bio-based aspect of the book comes from my being both a Nature Girl, and a Continuum movement teacher.  Continuum is a fluid based movement exploration that I have been teaching for over 22 years. www.continuummovement.com It’s where I’ve learned all about bio-intelligence, and the sparkle of life force we call Eros.  This is where Ursula’s tantric belly dance teacher, Sheerah, gets her smarts. It’s also how Ursula’s hips come to life.

Also, I love good food, and I care about the quality of the food I eat, and give my family. It amazes me how the general public can think that tampering with the very genetic material of the seeds our food is grown from is a good idea.  It also amazes me how many people have no awareness of what a GMO is, and how much of our food now originates from genetically modified seeds. I wanted to bring people to awareness in a way that might entertain them at the same time as sound the alarm.

I’m not a frivolous person, but I am a playful one.  I like to weave things together, and I have the ability to hold seeming opposites in the same space. It stretches me, and brings a complexity to what I write, in the humorous moments as well as the grave ones.

I love both your Continuum classes and belly dancing.  Tell us more about Sheerah and how the belly dancing feminists wiggle their way into your story?

Sheerah, Ursula’s tantric belly dance teacher who sells exotic creams to her students at cost, showed up as a teacher of the secrets of the divine feminine because I live in California, and I know such people.  Her instruction was just what Ursula needed to open her own muted feminine, and ultimately, Sheerah is the one who helps with Ursula’s awakenings.

As a movement teacher, I fully embrace movement as a source of connection with our bodies and our sensations—especially those undulating movements, the one’s deep in a woman’s pelvic bowl—they’re the ones that connect her with her own sacred feminine. Belly dancers know this.

Will you be writing the screenplay next?

Everyone who has read the book, or even heard me describe it says,  “It’s a movie!”  And it is a movie… a movie you can curl up with, all by yourself.  It’s a movie because that’s what I know how to write. You’ll see when you read it. However, the movie version of this movie-like book will be different than the book, because there are narrators, and inner thoughts, and supernatural occurrences in the book that need to be translated from the descriptive fiction on the page where pretty much anything can happen, back to an arena of symbolic action.  But yes, I’m writing the screenplay next.

One could say that this is the story of “you are what you eat.” Can you speak to that?

Ursula’s political and personal awakening comes once she experiences her first orgasm. One awakening leads to another.  But really, it all began once she started juicing and eating raw.  Prior to this she ate a pale and limited diet of breads and spreads, and felt sluggish and slow.  Once she changed her diet, she became lighter and more permeable to her own sensations, as well as being open to clear thoughts, like the ones that motivate her in the story.

Ursula believes that you are what you eat.  Donny is a fast food guy – but even he changes his food, in the name of love.

Can you direct us to the link to buy your book? 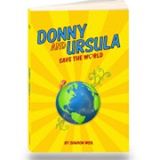 Sharon Weil is an award winning WGA screenwriter, producer, and director. Donny and Ursula Save the World is her first novel, and a welcome break out into new form. Her most recent writer-co-producer credits include “Reel Love,” a romantic comedy about a woman who must learn to bass fish in order to catch her father’s attention and find true love—which opened up the new Original Movie Division at CMT (Country Music Television) in Fall of 2011.

She was awarded the Women in Film, Lillian Gish Award, as writer and co-producer, for Best Children’s Film in 1990 for “Sweet 15”, which also won an Emmy for its director. She has written romantic comedies, family comedies and family dramas. She is a film graduate of NYU Tisch School of the Arts.

In addition to writing, Sharon has also been a director, producer or editor of many film
and television projects; narrative, documentary, commercials and music videos. She has directed several original theater productions, as well as written and performed her own work in one-woman shows, and shared evenings.

Sharon is an advocate for the natural world through her supportive work in climate
solutions, community arts, and holistic health. Her writing is also informed by 20 years as a teacher of Continuum, a fluid based movement practice that aligns one with a natural state of being.

Sharon has three daughters, two dogs, and one wild imagination. She is an eclectic Los
Angeles native, a frequent visitor to Northern California and Nashville, and a citizen of
the world.

2 thoughts on “Birthing Books – It All Begins with the Orgasm”