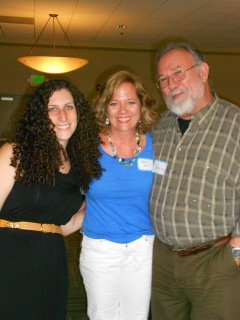 Turns out putting together a writing conference is harder than it looks. I have two years of proof to back that up.
And yet SCBWI volunteers worldwide do this every day and make it look like it’s nothing. Every minute they take to put on those conferences replaces valuable writing time, and, yet, they plan away. For so many years, I sat on the other side of that, slapped my dollars down on the counter (technically, I hit the PayPal button but somehow that image is not as powerful), sat in the audience, and asked myself the whole time if I was getting my money’s worth.  Those days are gone, much like before I became a teacher and stood in the doorway of my son’s second grade classroom thinking of how “I’d run that classroom.” (I saw those Karmic eyes staring back at me once I had my own class of second graders.)
In the end, though, when it comes together—often in a string of hard-pressed synchronicities—writing conferences are the fertilizer that writers need to grow. Especially conferences like the Second Annual Shasta County SCBWI Workshop.
What of those hard-pressed synchronicities? The first editor scheduled to attend the workshop left publishing after the initial flyers went out. So that author extraordinaire Charlie Price would not need to put on an eight hour workshop on his own (though I know he could’ve done it and done a smashing job), we began trying to find a replacement. Eventually, the initial editor attempted to contact a former colleague at a previous publishing house and, with the angels smiling down on us, Noa Wheeler of Henry Holt Books for Young Readers intercepted it. With an enthusiastic, “She’s no longer here, but I’d love to come!” we had an editor.
Between Edgar-award winning author, Charlie Price, and delightful Noa Wheeler, writers left at the end of the day with a full slew of questions to ask their characters and a technique for envisioning those characters in action. The workshop atmosphere allowed Charlie and Noa to work with writers in the moment on improving writing techniques in the moment. It allowed writers to write. And it gave all the attendees an opportunity to really get to know Charlie and Noa who made a point of connecting with attendees and finding out about their writing.
The next time you attend a writing conference, here’s my advice. If you really want to grow, get involved. We’re all busy, but look for ways to help. It’s a community effort, and the more you actually connect to the community, the more you will evolve as writers–and as people.